The Return of the Multi-Language Insert (MLI): Where Did it Ever Go?
By Summer Beach, Associate Director, Medicare Compliance Solutions, Toppan Merrill on 16 February, 2022
1 min read | Industry Insights Insights Home

Following its appearance in Centers for Medicare and Medicaid Services (CMS) Proposed Rule, we’d like to visit the “push-me / pull-me” history surrounding the Multi-Language Insert (MLI) and its likely reinstatement. Heads have been spinning on what’s really been required the last few years as we’ve seen the essential MLI document emphatically introduced as a foundational requirement, then mysteriously vanish. What seemed “core” language to required documents like the Annual Notice of Change (ANOC) and the Evidence of Coverage (EOC), vanished without a word. Now it appears to be coming back, which is definitely a good thing for Medicare beneficiaries. But what is the MLI really, and how did the MLI’s “now you see me, now you don’t” whiplash actually happen?

What is the Multi-Language Insert?

CMS instituted a requirement in 2012 for Medicare Advantage Organizations (MAOs) and Part D Plans to communicate the availability of free language interpreters for anyone contacting their health plan. Free interpreter availability was communicated through the Multi-Language Insert, which CMS required for delivery with certain benefits and enrollment documents. To facilitate the rollout, CMS provided a template to health plans, containing translations of the following statement in the top 15 languages used in the United States:

“We have free interpreter services to answer any questions you may have about our health or drug plan. To get an interpreter, just call us at [1-XXX-XXX-XXXX]. Someone who speaks [language] can help you. This is a free service.” 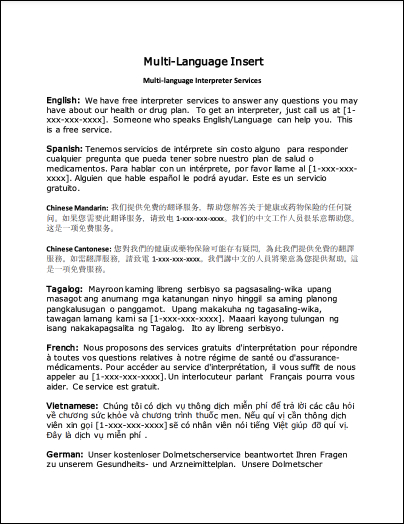 Further, CMS instructed that additional languages would be required if 5% or more of a plan’s enrollees in a service area spoke other languages not already displayed in the template. The MLI was destined to become a critical communication asset for non-English speaking persons to convey interpreter availability.

The discrepancy arose when two regulatory entities began swimming in the same content. Enter the first joiner to the discussion in 2010, the Office for Civil Rights (OCR), whose mission (among many things) is to propagate fairness, equity and inclusion, and protect persons from discrimination in certain health care and social service programs. The OCR was first in the arena opening the discussion, introducing language required on “significant” materials such as the EOC, ANOC, and even reduced verbiage on smaller advertisements. But CMS was first to finalize the requirement. With this in mind, below is a 10,000-foot view illustrating how these industries inadvertently bumped heads, and how the cards later fell creating both overlaps and eventually gaps:

This lack of coordination between the regulatory bodies and simply timing in their processes, meant that the industry was left without active guidance in place by either CMS or the OCR for materials language communicating interpreter availability.

This oversight drove an uptick in complaints against plans through CMS’ complaint center (called the “Complaint Tracking Module,” or CTM) which can impact health plans’ Star Ratings – which, in turn, can lower a plan’s compensation if Star Ratings go significantly down.

Direct and Indirect Impact for Plans

CMS’ estimates for reinstatement of the MLI may underestimate impact to plans for re-implementing such as time expense, including:

Let’s consider how this overall language abandonment may have impacted health plans through indirect means. Considering CMS’ acknowledged gap in this regulation, did CMS happen to give credit to plans on the complaint measures impacting their Star Ratings? We know lower Star Ratings equate to lower payments to health plans. With 12.2% of persons over age 65 speaking a non-English language in the home, which ratio of complaints were attributed to enrollees’ communications issues from not realizing they could still access interpreters? Further, did a lack of understanding impact their access to care (another Star Ratings measure)? And what degree of healthcare services measured by Star Ratings, were not obtained because beneficiaries didn’t realize an interpreter was available to answer benefit questions? The domino effect of the interpreter availability gap into Star Ratings may never be separately analyzed, but it’s probably measurable.

Toppan Merrill has experts who specialize in CMS-driven communications for document production and distribution. With a highly sophisticated product suite, and a team each averaging over 15 years’ experience in the industry and Medicare-related document creation, Toppan Merrill is accustomed to accommodating CMS’ regulatory changes, taking the burden off your team. We welcome your questions at info@toppanmerrill.com and look forward to discussing how we can help your organization simplify your annual documents processes.

With over 25 years in the insurance industry, Summer’s focus is Medicare-related compliance. With past roles as Regulatory Compliance Manager and Director for state, regional and national insurers, her areas of SME include CMS-regulated documents and guidelines, agent/broker and sales compliance, designing CMS-approved investigation processes, audits and Corrective Action Plans, and training with re-education formats following CMS disciplines. Summer brings expertise in policies and procedures, auditing compliance programs, and has measurably reduced plans’ member complaints to CMS through remedial initiatives. Well-versed on CMS insights, Summer identifies risks to avoid, for staying compliant. Summer’s experience supports Toppan Merrill and our clients in staying compliant with CMS and regulatory requirements.