Toppan Vintage, a trusted financial printing and communications company, in partnership with Mergermarket, is pleased to present the newest edition of M&A Pulse newsletter. This newsletter features responses from Francois Mallette,
L.E.K. Consulting.

Toppan Vintage asks, in your experience, do dealmakers adequately price in the inherent risk involved in M&A deals? Mr. Mallette weighs in...

Francois Mallette, L.E.K. Consulting: Companies can show good growth through acquisitions but still destroy value. It’s easy to believe that growth will magically result in more value creation, but that’s not the case. Indeed, there are a number of studies that show many acquisitions result in the destruction, rather than the creation, of value.

Nobody goes into a transaction thinking that their deal won't succeed and create value, and our clients do a reasonably good job of accounting for risks. But it can be difficult to quantify risks when valuing a deal, so we disaggregate risk into two types. The first is the systematic risk of being in that industry – the supply and demand dynamics of that industry. We embed that risk in the cost of capital used to discount the cash flows of an acquisition.

The second type of risk is unsystematic risk – that’s everything else, for example, if a hurricane were to destroy part of your plant in Florida. There are all kinds of risks to consider and you have to be judicious about which risks and how you embed them in your analysis. These risks are incorporated in cash flow scenarios and simulation analyses.

Mergermarket: Difficulties with postacquisition integration are a perennial problem in M&A deals. Why do you think acquirers have trouble with this step of the process?

Francois Mallette, L.E.K. Consulting: Over the past decade, the idea of spending more time on integration has grown in importance for our clients. Part of the reason for doing these deals in the first place is to capture synergies between two
companies. But synergies don’t capture themselves so there has been a realization that more attention should be paid to this whole process.

Before we speak about integration issues, however, not all deals require integration of the purchased company into the buyer. We first think about the purpose of the acquisition and whether, on one end of the scale, the target should operate independently of the buyer or if it should be combined into one entity. You might be a big company that acquires a small firm with interesting technology and you may want to let it operate on its own because its people, markets, technology, and processes would be adversely affected by an integration. For example, a recent artificial intelligence acquisition by General Motors was not integrated into GM in the sense most people think about a combination of the two companies.

In those situations where you do want to integrate fully, we find the more difficult integrations are those where companies are very people-oriented and less asset-oriented. Part of the reason is because people are more complicated than assets. In an acquisition, there is a tendency by those being bought to feel like second-class citizens and to feel uncertainty about their futures, which creates an environment where they may consider leaving the company. And it’s the most valuable employees that you’re most likely to lose. As a result, while there are many things to consider in an integration, one of the main issues is retaining key people. Many buyers don’t pay enough attention to that and lose people who are important to the success of the acquisition. So that’s the first thing: don’t lose great people.

Number two: we often see good ideas about synergies in a deal, but in reality they are tricky to capture. So the lesson is to not expect and pay for synergies that aren’t real or that you’ll never capture.

Number three: capturing synergies takes time, focus and usually involves people. You typically need to have people from both firms come together and work on the best path forward. You need to push that process very hard and in a very clear way for it to work. It also costs time and money. So the lesson is to manage people in that process, put good process management in place, and drive to realistic but aggressive timelines, because time is value.

Mergermarket: More than two-thirds of our survey respondents (70%) said that a lack of compatibility between management teams contributed to the failure of a deal. Why do you think this issue so often plays a role in M&A failure?

Francois Mallette, L.E.K. Consulting: Careers are at stake in a takeover, and some people lose their jobs – so it’s no surprise that management teams may not welcome each other with open arms when this issue is on the table. If you don’t move swiftly and establish a clear vision for the future of the two companies, you create a vacuum in which people may come to the wrong conclusion about their future at the company and leave. Or they act in an inappropriate manner.
The longer you leave these issues unaddressed, the worse it is for your integration efforts and your ability to capture synergies.

I'll also add that it’s difficult to assess the compatibility of a management team in the best of circumstances. In the spectrum of the whole diligence checklist, we see this aspect of the diligence receiving relatively less attention.

Mergermarket: More than 90% of respondents said the cross-border nature of a deal contributed to its failure, indicating that crossborder transactions are inherently riskier endeavors. In your experience, are acquirers improving their abilities in this area?

Francois Mallette, L.E.K. Consulting: Our clients are pretty savvy when it comes to cross-border deals, but many of them have learned their lessons through trial and error. China is a great example of a growth market where many companies believe that they “can’t afford not to be there.” However, it is not an easy market to break into or an easy market in which to do business. This is also true for Brazil, India and Russia – the business dynamics are very different. So, we see people dip their toes in the water – start small, and then grow their operations. This takes time and can be frustrating. But doing a big acquisition successfully in another country can be very difficult unless you have people with local market experience. And even then, every deal is different and every country is different, so you need to invest the time to understand what you’ll be getting yourself into.

Mergermarket: Have you had experience with any companies that have effectively salvaged value from an otherwise failed deal?

Francois Mallette, L.E.K. Consulting: Yes. Some turnarounds we have seen were the result of a change in senior personnel. We had a client in Michigan, for example, who assigned one of their senior executives to be executive chairman of an acquisition. The business was not moving quickly to pursue the buyer’s strategy, so they made a leadership change – this executive chairman became CEO and was able to drive change.

Other deals were salvaged through a change in strategic direction. In one case, the strategic premise of an acquisition was to broaden the product portfolio. When it turned out the value proposition was not in line with what customers wanted, the company separated the two companies and started buying firms in each market to become a compelling competitor in each product area. The other way a deal has been salvaged is through a change in direction. A company might have thought that the benefit of a deal was to offer customers two products together. But it might turn out that they don’t want these from the same provider. In one case, it took time to come up with new products for new segments in the market, but once they got in, they found there was actually an opportunity there. So they moved the business down-market a bit to help to capture those opportunities. 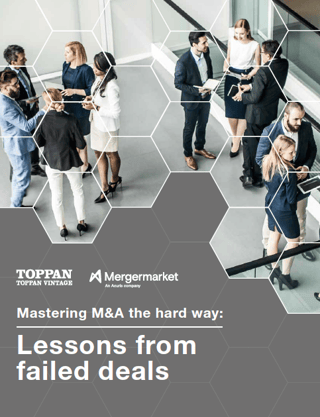 UNDERSTAND EXACTLY HOW AND WHY SOME M&A DEALS FAIL TO LIVE UP TO INITIAL EXPECTATIONS, AS WELL AS THE LESSONS THAT CAN BE LEARNED FROM THEM.

Toppan Merrill, a leader in financial printing and communication solutions, is part of the Toppan Printing Co., Ltd., the world's leading printing group, headquartered in Tokyo with approximately US$14 billion in annual sales. Toppan Merrill has been a pioneer and trusted partner to the financial, legal and corporate communities for five decades, providing secure, innovative solutions to complex content and communications requirements. Through proactive partnerships, unparalleled expertise, continuous innovation and unmatched service, Toppan Merrill delivers a hassle-free experience for mission-critical content for capital markets transactions, financial reporting and regulatory disclosure filings, and marketing and communications solutions for regulated and non-regulated industries.