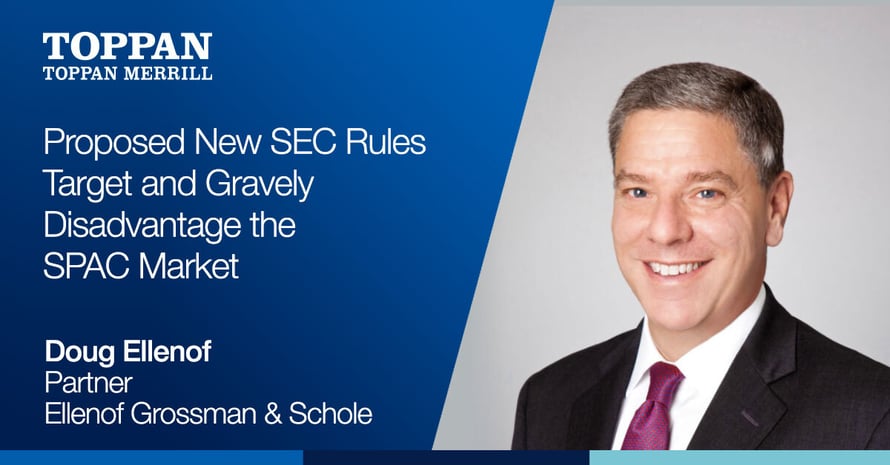 I had the honor of kicking off the SPAC Conference 2022 this June with what was supposed to be a “State of the SPAC Market” talk. But instead, I felt compelled to focus on the most pressing issue facing the SPAC market: The Securities and Exchange Commission (SEC) has proposed new rules for SPACs and De-SPACs that would upend 30 years of precedent — under Republican and Democrat administrations alike — and gravely disadvantage the SPAC market like never before.

The SEC announced the proposed new rules in March 2022, with SEC chair Gary Gensler stating that “investors deserve the protection they receive from traditional IPOs, with respect to information asymmetries, fraud and conflicts, and when it comes to disclosure, marketing practices, gatekeepers and issuers.”


While the SEC characterized the new rules as “clarifications,” they are better described as brand-new concepts. The proposed new rules signal the SEC’s intention to begin treating SPACs and IPOs alike — a significant departure from how the SEC has regulated the SPAC market for the last three decades. If adopted, the proposed new SEC rules will require:

The SEC refers to this as leveling the playing field, requiring private companies seeking to enter the public market to be subjected to the same rules, governance, diligence and liability to protect investors. I certainly understand the SEC’s concerns and logic. Yet it’s fraught with peril — effectively waving a magic wand, expecting a smooth transition and not anticipating inadvertent and unintended consequences.

One of the biggest hidden bombshells is the SEC’s proposal for retroactive applicability—along with associated responsibility and liability. The consequences of retroactive applicability cannot be understated. For closed and pending SPAC business combinations, the suggestion is that IPO underwriters, placement agents, M&A advisors and other advisors will have gatekeeper responsibilities like an underwriter in an IPO. All of these constituents will have liability for violations of security laws by the SPAC and/or target for disclosure and projections used during the business combination process. Imposing liability on IPO underwriters and advisors has never been used in SPAC/De-SPAC historically. It is a novel and dramatic expansion of the application of who is and isn’t underwriters, as well as imposing liability for those firms in a non-IPO, non-distribution-of-securities context.


The SEC seems to redress this factual difficulty by rewriting definitions to get past this hurdle. The SEC’s new rules would deem a De-SPAC transaction as a distribution of securities — when in fact, it is not. I can generally follow the SEC’s logic here, but I vehemently disagree: The complexities of how a De-SPAC is processed are undeniably an M&A transaction under state corporate laws.


Furthermore, I question whether the SEC is truly seeking to treat like cases alike — or opportunistically picking which rules it wants to be applied against SPACs. I understand the SEC wants to reorient how we regulate business combinations to be more like IPOs. But it’s historically inaccurate to suggest the SECs of prior administrations held this view. Prior SEC administrations were equally concerned with investor protection, proper process and quality of disclosure — and they had equally legitimate reasons for taking a decidedly different approach with regard to regulating the De-SPAC process. It is fundamentally unfair to impose retroactive liability to a new way of thinking about SPACs that no prior SEC administration viewed in this manner.

Even if we assume target IPO orientation is the better approach, imposing those standards retroactively isn’t appropriate — and is already undermining confidence in how our capital markets operate.


For nearly 30 years, there have been virtually no civil litigation or enforcement actions — evidence that investors and regulators alike thought the SPAC market operated efficiently and effectively. Yet already, the proposed new SEC rules have paralyzed the SPAC market and disrupted the more-than-600 funded SPACs and hundreds of already-closed deals.


At this point, I am struggling to provide clear advice to clients — and I’m not alone. Since the SEC’s announcement last March, major bulge bracket underwriting firms have announced they will no longer be available to assist with SPACs. Law firms and clients have no ability to properly assess what the SEC has authority to approve and the impact on past, current and future transactions. This is a clear and quite disturbing byproduct of the SEC’s proposed new rules that include the imposition of retroactive liability.

The SEC also has proposed problematic new safe harbor guidelines for SPACs. The new guidelines require business combination agreements to be executed within an 18-month period and closed within 24 months. This applies to SPACs seeking to transact as well as those that already have, which creates the issue of what actual authority SPAC has or had to engage in these transactions after the expiration of safe harbor periods. If the SPAC doesn’t satisfy the 18- and 24-month time limits, its ability and authority to enter into any proposed business combinations after the defined periods would be called into question. This is the current reality for many funded and closed deals — despite full transparency and disclosure in the SPAC IPO Prospectuses, which were reviewed and cleared by the SEC.


Typically, a non-exclusive safe harbor is implied. Just because your facts may fall outside of the specifics of the safe harbor, SPACs were not necessarily out of luck. But that’s not the case with the new safe harbor guidelines. Contained in the proposed new rules is the suggestion that trust funds would have to be given back to the public. This will be structurally awkward because many SPACs have clearly disclosed lifecycle and escrow arrangements that don’t permit early distributions. Rather than advancing investor protection, this new guideline harms that effort and it may be deemed inconsistent with the disclosure in the original prospectus.

A final component of the new rules that I want to call attention to is the proposed requirement for additional disclosure around the use of projections to inform investors about the peril and inherent unreliability of SPAC projects. Despite the SEC’s publicized hostility toward projections and its view of the nature of the quality of projects, projections have been used in De-SPAC transactions and submitted to the SEC for more than a decade. This is considered conventional practice. There may be representative examples of projects that haven’t been prepared with a reasonable basis — which is the standard to avoid liability — but other than last year, I can’t recall one example of the SEC challenging a set of projections used in a De-SPAC transaction.


Therefore, the SEC’s issue with projections does not seem to justify wholesale reform as it’s being proposed with the new rules. We have closed nearly 300 business combinations in the last couple of years and the projections we used didn’t have any problems. What may be less obvious is when you marry the SEC’s new approach with the new rules around underwriter liability, the SEC is seeking to cause all the advisors to have exposure for projects. The proposed new rules differentiate and discriminate against SPACS because a SPAC and its target more likely than not must make these projections available to the public.


The SEC is further seeking to force SPAC board of directors to represent in disclosure documents that the De-SPAC transaction is fair in their judgment. The consequence of this is that the board of directors will want to mitigate exposure and obtain expensive fairness opinions. As the SEC fully understands, neither IPOs nor direct listings are required to make a similar representation—and as a result, don’t have to expend resources to obtain a fair opinion.


This is a very telling example of selectively targeting and burdening the SPAC market, not leveling the playing field and not treating like cases alike.

There always will be a healthy debate about where to draw a proper balance between investor protection and capital formation. But it’s plainly inaccurate to characterize the SEC’s proposed new rules as “clarifications.” Moreover, besides the fundamental inequity of seeking to impose retroactive application of certain rules, the SEC needs to justify why its proposals are seeking to treat like cases alike and level the playing field.


I want to be clear: I ultimately do not believe the SEC is trying to discontinue the SPAC market. But I do believe the SEC needs to appreciate that the SPAC industry isn’t trying to cause harm to public market investors. Rather, our industry’s driving force is to finance innovation, create jobs and potentially make investor returns.


It’s not too late. All of us who worked in the SPAC market for many years share an institutional memory: We understand how and why existing regulations and protocols have enabled us to maintain this market effectively and efficiently for decades. It’s time for us to collectively engage the SPAC industry and seek cooperation to find alternative solutions that may be more balanced, while still achieving some of the SEC’s goals.

Douglas S. Ellenoff, founding partner at Ellenoff Grossman & Schole LLP in New York City. Ellenoff was key note speaker on this subject at the SPAC Conference 2022 held in mid-June in Westchester, New York. Since his law firm’s founding in 1992, Ellenoff Grossman & Schole has focused on corporate and securities law with a specialty in alternative financings, including SPACs, M&A, PIPEs, RDs and Crowdfunding. In the last 10 years, he has been involved at various stages in numerous registered public offerings, including more than 100 financings and hundreds of private placements into public companies. Since 2002, Ellenoff has been involved with more than 250 SPAC IPOs and 60 business combinations.