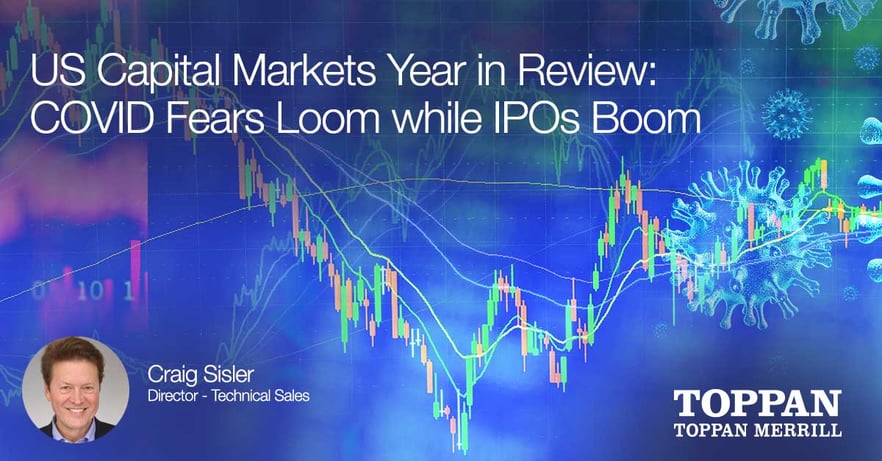 As 2021 began, there was an air of cautious optimism in the world. Although still in the throes of the unprecedented COVID-19 global pandemic, vaccines were becoming available and mass vaccination programs were put in place, businesses began to reopen, and people started coming out of hibernation – mental and physical. US capital markets burst into the New Year as part of this reawakening. The US IPO market just plain went nuts this year. In Q1 alone, the volume of IPOs hit 390 – 90% of the IPO volume in all of 2020. The conspicuously tall bar in this chart says it all.

This Q1 surge in deal volume included “traditional”, straight-up IPOs which jumped a whopping 61%. Meanwhile, SPAC IPO activity was ridiculous. SPAC volume not only jumped 220% over the previous quarter, but eclipsed SPAC deal volume for all of 2020, in just one quarter. Again, the conspicuously tall bar in the chart below tells the story.

Ah, but then the Delta variant of the COVID virus hit. Surely, this would cause global panic and send markets – and people – into hiding, right? No, not really. Even though Delta was deeply concerning, the presence of vaccines and greatly improved treatment protocols, along with the American tendency to say crisis-schmisis when trouble comes our way, helped to blunt the impact of the variant.

Then, if the year wasn’t already weird enough, we saw another example of American feistiness. With the pandemic still not letting up and inflation rising, millions of people started quitting their jobs around mid-year. And this “Great Resignation” created a national labor shortage and helped deepen the supply chain crisis (N.B.: Labor Department data shows people are now returning to the workforce in large numbers.). So, might these additional factors kill the market surge? Not so much. The IPO frenzy did slow down after Q1, but it continued at a record-setting pace throughout the year right up through today. Worth noting is that the Federal Reserve, in its November Financial Stability Report, said that the SPAC market declined from Q1 levels “in part because of increased regulatory scrutiny”. We experienced this firsthand when customers had to scramble to modify their financial reports to comply with new SEC guidance. Nonetheless, as of this writing, the total number of IPOs in 2021 (SPAC and non-SPAC) has reached 977 (and counting). That’s more than double the all-time record set last year of 480 total IPOS and crushes IPO stats for the past 20 years (see below).

So, what is really going on here? There are more opinions than you can shake a stick at, but there are a few drivers behind this tsunami of Traditional IPOs and SPACs on which there is a consensus. The Federal Reserve plays a significant role. Their quantitative easing policy (QE) shifted in 2020 in response to the pandemic to boost economic activity. This involved injecting $700 billion into the US economy, largely through purchases of bonds and other securities. This put a load of cash into the banking system. Interest rates were also lowered. Another key ingredient in priming the economy for the IPO/SPAC onslaught was the Federal government stimulus program which sent over $800 billion of stimulus payments directly to individuals and families. Some analysts also believe there has also been a corporate/psychological impact from COVID. The pandemic has forced everyone – people and institutions – to step back, rethink what they’re doing, how they’re doing it, and then retool or reboot. The mind-shift/adaptation required by all of us coupled with large stimulus payments to millions seems to have also caused some people an inward examination and reevaluation which has precipitated unforeseen socio-economic changes including the Great Resignation while simultaneously propagating a boom in IPOs.

I should also note that, along with the IPO boom, M&A activity has also bounded back from a slump last year – with a more than 140% jump this year over last, topping $2 trillion. Actions by the Fed and Washington as described above served to also support this huge increase in activity.

Global deal activity has also been strong this year with strong traditional IPO activity and SPACs gaining more traction in EMEA. Global IPO activity (including the US) is already more than 40% higher ($130 billion) than all of 2020. And global M&A volume has passed $4 trillion this year and could reach a record-setting and mind-blowing $6 trillion when the dust settles at year’s end.

Can the boom continue?

Now, what about 2022, you may ask? Let’s face it, it’s been a crazy, unpredictable two years, but what the heck, it’s the end of the year, so let’s prognosticate. Presuming there are no new pandemics, wars or other human or natural catastrophes, some reasonable assumptions can be made. The Fed said recently it will slow down bond purchases which will reduce the influx of cash into the system – this is a move toward a post-pandemic monetary policy which has generally been expected. So, despite the Fed tightening up their QE policy, the consensus seems to be, while we probably won’t have another record setting year, US capital markets will remain very active with new IPOs of both flavors (SPAC and non-SPAC) continuing to launch. There are already approximately 100 Traditional IPOs in registration with the SEC plus well over 300 SPACs also in their pre-IPO phase. Add to this over 500 SPACs still searching for targets, and it should be a busy year for all. It appears US M&A activity will also continue its strong run. Despite a momentary swoon of the stock market when news of the COVID Omicron variant hit, the market started to rebound and is still up 15% on the year. This is another indicator of resilience and stability. Likewise, economic fundamentals in the US are solid.

So, it’s been an amazing year for capital markets and for those of us fortunate enough to be a part of the journey and the near-term also looks great. But, because of the COVID-19 pandemic, it’s also been a difficult year – two years, really – for millions of people around the world. So many stories of tragedy and bravery, of sadness and loss alongside moments of joy and gratitude. As we enter this holiday season, let us hope the world will continue to heal over this coming year. And in that spirit, we hope you and yours have a healthy, happy holiday season and a prosperous New Year.

To learn more about Toppan Merrill services supporting Capital Markets Transactions, reach out or have us reach out to you.

Craig Sisler is Toppan Merrill’s Director of Technical Sales and holds responsibility for Sales Engineering and Consulting in North and South America.  Craig has more than 25 years of experience supporting clients in capital markets transactions and SEC reporting. Prior to joining Toppan Merrill to help the company transition to a SaaS technology focus, Craig held a variety of technology leadership roles including CIO of Capital Systems and Senior Advisor at Bowne.

Craig has been a featured speaker at technology conferences and seminars for major legal and audit firms on the future of technology in corporate transactions, IPO readiness and other topics.  A New York native, Craig holds a BFA from the University of North Carolina and a BA in Biopsychology from Hunter College in NYC.

Previous ArticleWhat Can a Dynamic Health Insurance Welcome Kit Do For You? (Part 2)
Next ArticleAdvertising Practices Prohibited Under the New Modern Marketing Rule