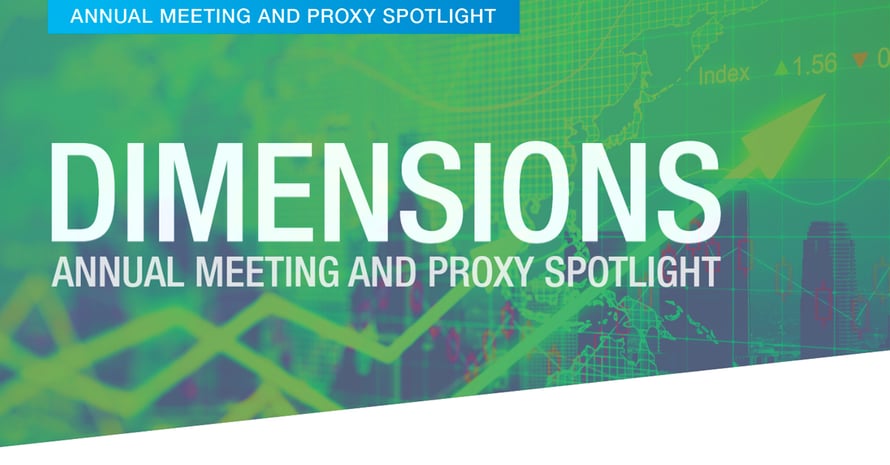 Here’s a problem: The traditional, in-person, annual shareholder meetings held by public companies have suddenly become troublesome. The 2020 pandemic has made large gatherings unwise and, in some cases, unlawful. For many companies, “virtual meetings” held online have morphed from optional novelty to downright necessity. In all of 2019, public companies in the United States held only 326 virtual annual meetings; in 2020, companies had already held more than 2,000 by June 19.

Is the virtual meeting just a stopgap solution for pandemic times? Or has Covid-19 permanently turned annual meetings from traditional conferences to online interactive live-streams? The first of Toppan Merrill’s 2020 Summer Thought Leadership Programs was (fittingly) a webinar on these issues: Virtual Shareholder Meetings: Hit or Miss?, aired on August 6th. Its purpose was to help companies make sound, practical decisions as they plan for their next annual meeting. The webinar offered a panel of experts:

They discussed the pros and cons of virtual annual meetings; the impact on shareholder participation; and their insights on how to make virtual meetings as effective as traditional meetings.

The future of the annual meeting: in-person, virtual, hybrid?

“This past 2020 proxy campaign, Covid-19 threw a monkey wrench into the entire process,” Toppan Merrill’s Mike Spelman stated in his introduction to the webinar. “It forced thousands of publicly traded companies to seek alternative solutions to gather an audience for shareholder meetings.”

He asked the webinar’s panelists: Will traditional meetings ever resume? Are virtual shareholder meetings the new normal, or will public companies eventually settle on some type of virtual/physical hybrid event?

Cindy Blumhardt responded first with the thought on everyone’s mind: “It is really going to depend on the state of the union at that point. Will there be a vaccine for the virus by then?” Her company, Principal Financial Group, will consider the positions that proxy-vote advisory firms ISS and Glass Lewis take
on virtual meetings in 2021 before deciding on the type of annual meeting to have. “I think if we do decide to do a virtual meeting, it would likely be more of a hybrid meeting where we have kind of a live video stream from our office in Des Moines—make it a little more interactive.”

In shareholder annual meetings unexpectedly held online because of pandemic necessity, Bruce Goldfarb from Okapi Partners warned, the technology may not be sufficient to accomplish the task. “We are relying on technology that, in many cases, was not totally tested for the purposes for which we have been using it,” he observed. “We have had to navigate with a faster pace—picking up speed in terms of the number of companies that have made use of a process that was untested.” He said he believes the hybrid model, in which physical attendance is permitted while the event is also live-streamed, will be adopted by many companies.

However, he expects that when conditions permit, some companies will return to the traditional in-person meeting. The technological pressures and risks of a virtual shareholder meeting—which he explained later in detail—may not be worth the benefits of online convenience. “There will be some companies who recognize that the challenges of running both a virtual meeting and an in-person meeting have led them to say it may just be worth it to have our meeting in person once again.”

While he noted that the decision will be based partly on technology and partly on the input of ISS and Glass Lewis, Mr. Goldfarb thinks the choice will depend on company policy, culture, and even brand identity. “It will come down to how a company works with the service providers and its internal team to prep for...the kind of meeting that everyone feels comfortable with—a way to best put forward the company and its brand and its value to its shareholders and also its stakeholders.”